In the life around us, everything is connected in some unexpected ways. This fact was very well illustrated by Charles Darwin, the famous scientist, in his book “The origin of species”. He has managed to prove in his short example that the number of old maids and their domestic cats in the area can influence the amount of clover in the nearby meadows. 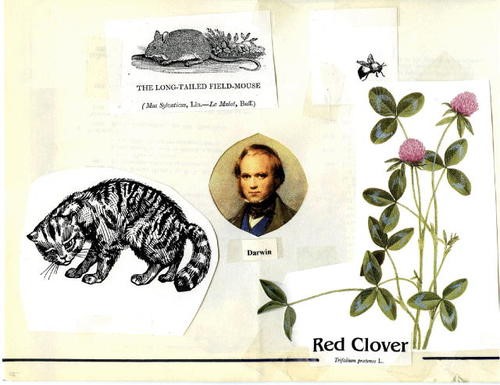 Red clover and cats example from “Origin of Species”

How can cats influence the clover?! They do not eat it, right? But still, there is indeed a relationship. Darwin began from the most well – known fact: clover is pollinated by bumble bees. Without pollination, clover cannot produce seeds – and next year, no new clover plants can grow. But the nests of bees can be destroyed by field mice. Mice can also eat the bees themselves. And the number of field mice is controlled by cats that go out from the houses and catch them. More people with cats means less mice and more clover as a result.

This example is too simplistic, of course. But this is a very striking example of a more complex issue – how food chains work in the wild.

Scientists from early on have tried to understand the relationships between various organisms in nature. The most obvious relationship is feeding. Feeding can also be describes as movement of energy and nutrients around the ecosystem.

At the beginning of every food chain are those who produce nutrients. And on our planet, the only producers are photosynthetic organisms: photosynthetic bacteria, algae and plants. Because they are able to perform photosynthesis, they can use water, the energy of the light and carbon dioxide to make their own sugars and proteins.

All these animals can become food, too. Most of them have predators – reptiles, birds and animals that feed on them. They can also be called secondary consumers. Frogs, kingfishers, foxes are typical examples of those.

In any ecosystem, there is always a predator that is stronger than anyone else. Killer whales or sharks reign the seas; eagles, wolves and lions dominate the land. Those animals do not have any natural predators of their own. They are the tertiary consumers or top predators.

In the Darwin’s typical example the food chain would be as follows: 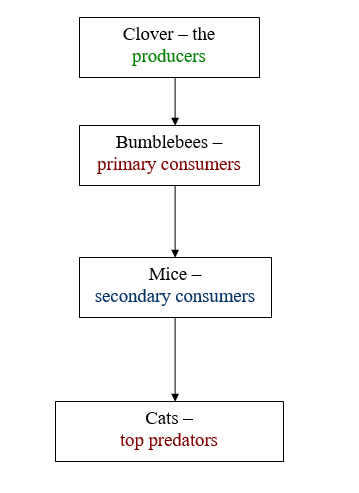 This relationship seems pretty straightforward and simple. But in reality, the relationships between organisms in the meadow would be far more complex:

As you can see, there are many factors that influence everyone living in any particular area, such as a meadow, a pond or a forest. Each organism can have multiple arrows pointing towards multiple other living beings. Instead of a simple food chain, all of the organisms in the given ecosystem form a complex food web or food network. You can find such relationships anywhere: in the seas, on the land and even in the soil. Here is an example of a soil food web: 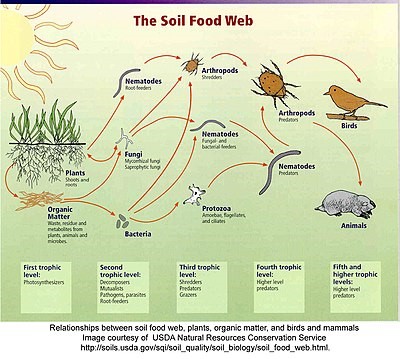 Energy is produced, transformed and moved in a cycle everywhere. And when we interfere in these complex relationships, we may destroy the whole ecosystem as a result. One of the important jobs that ecologists do is to investigate those complex food webs and monitor them, protecting the ecosystems from destruction.