We all know that humans viviparous and sexually reproducing animals. The reproductive activities in humans involve the gametogenesis (formation of gametes), i.e., ovum in females and sperm in males, insemination (transfer of sperms into the female genital tract after which fusion of these gametes take place (fertilization) giving rise to a structure called Zygote. Further cell division helps in the formation of the blastocyst and its attachment to the uterus (implantation), gestation (embryonic development) and parturition (delivery of the baby). These reproductive activities start only after puberty and body undergoes remarkable changes.

In early teenage years, a lot of changes happen in our body which cannot be merely attributed to the cell enlargement. The appearance changes drastically with changes in proportions and appearance of new features and sensations. Some of these modifications are common to both male and female. The growth of thick black hair such as genital areas and armpits, the appearance of thinner hair on legs, arms and face. Some people also experience the appearance of oily skin leading to pimples.

However, there are some changes that are not common in male and female bodies. In females, the size of the breast increases while males begin to have a thick growth of hair on their face and the change in the voice is also seen.

All of these changes are not abrupt but occur slowly and gradually over months and years. These changes do not necessarily occur all at once and can appear at a different age for different individuals.

All these changes directly or indirectly contribute to sexual reproduction. Sexual mode of reproduction involves the germ cells from two different individuals. The fusion of these germ cells can occur either outside the body (as seen in some animals) and inside the body (in human beings).  The transfer of these germ cells between two individuals needs some kind of special organs like a penis that can transfer sperm in the female body. In humans, the baby is carried in the body of the mother for a long time and is breastfed after birth. To make all this happen, the body of the female needs to be mature enough to accommodate these possibilities. 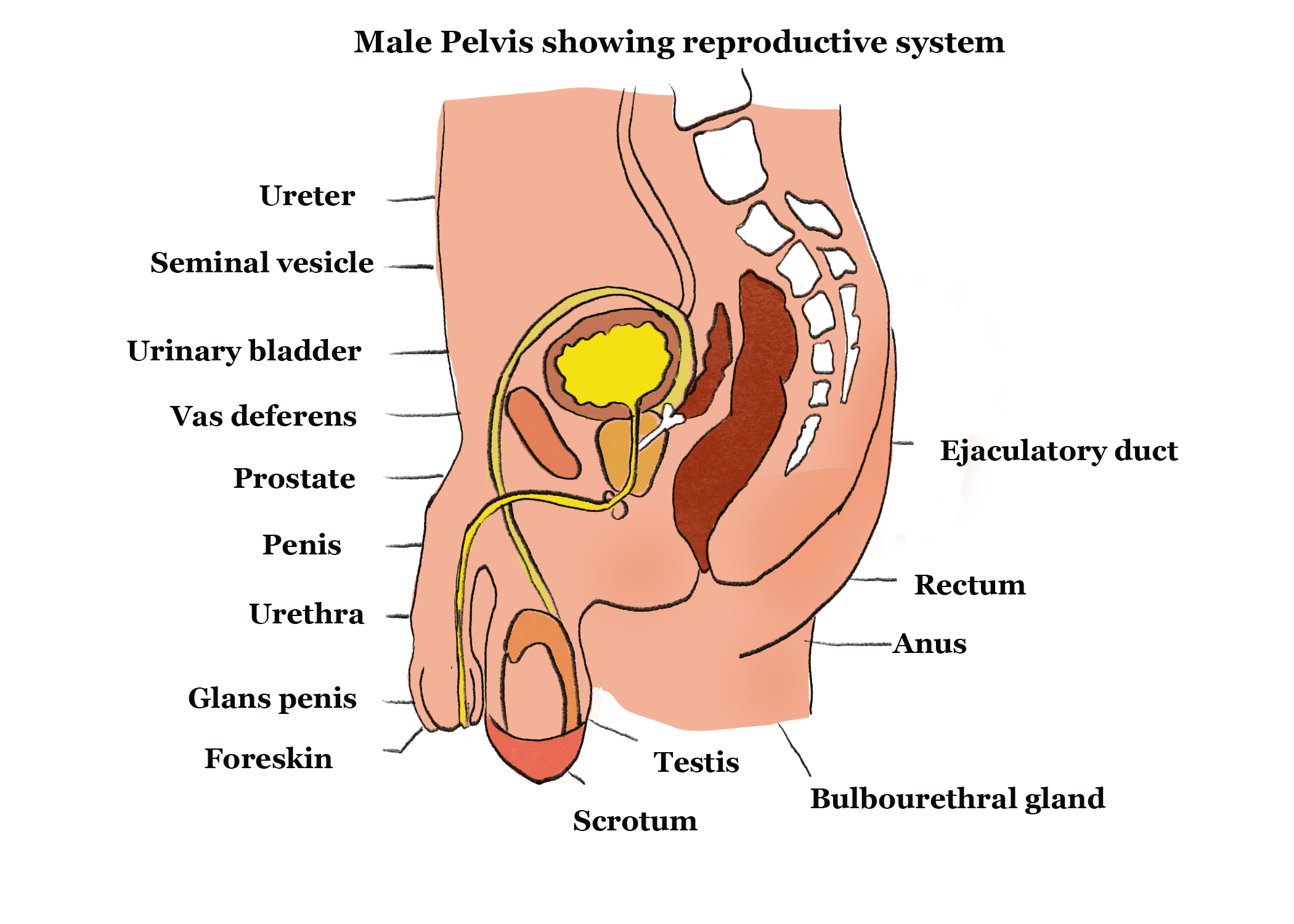 It is responsible for the formation of germ cells and also allows the transfer of these germ-cells to the site of fertilization.

The formation and development of germ cells or sperms occur in the testes. The testis is situated outside the abdominal cavity in scrotum. The reason for this is that sperms need low-temperature conditions for formation. In addition, a hormone, testosterone, is responsible for the changes in the body during puberty.

It is adjoined with the urethra, a tube coming out of the urinary bladder and helps in delivering the sperm in the female body. Thus, the urethra is a common passage for both urine and sperms.

When sperms reach urethra, it fluid from prostate glands and seminal vesicles are released that allows the transportation of sperms easier. The sperms are small bodies that consist of a long tail and genetic material. The tail is present to provide mobility to these germ cells. 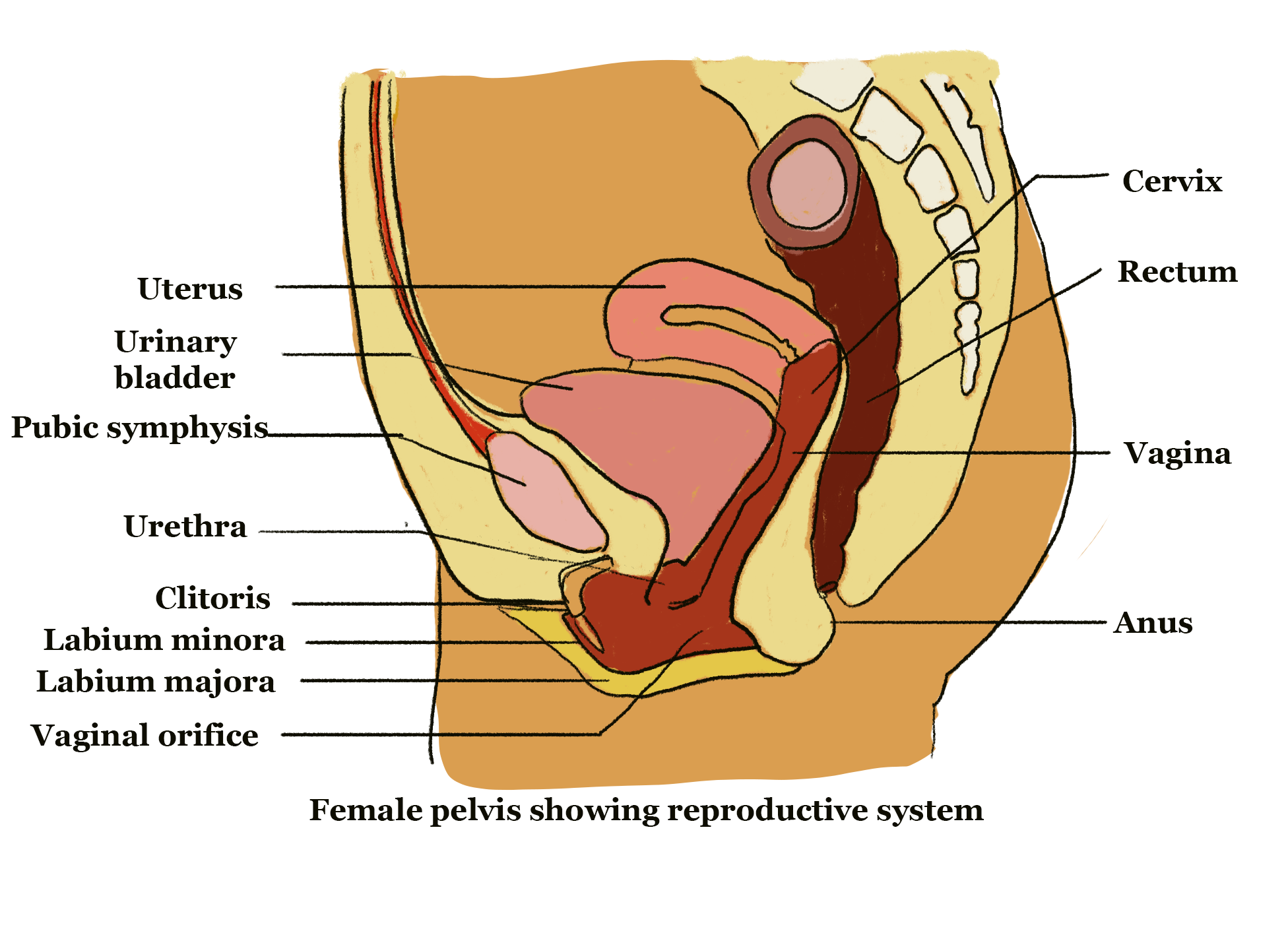 The formation of female germ cells or eggs takes place in ovaries. Some hormones are also produced in ovaries. When a girl is born, the eggs inside the ovaries remain immature till the age of puberty.

It is a duct used to carry the egg from the ovary to the womb. The two oviducts unite and reach the uterus

It is a bag like structures which further opens into the vagina through the cervix.

During sexual intercourse, the sperms enter in the vagina and travelling upward they try to reach the egg through oviduct where they finally meet the egg. The implantation of the fertilized egg occurs in the uterus which starts developing by cell division. The body of the mother is designed to accommodate the development of the child. Therefore, every month, the uterus prepares itself every month to nourish the developing embryo. The thickness of the uterus lining increases and is richly supplied with blood to nurture the growing embryo.

The embryo gets its nutrients from the mother’s blood with the help of a special kind of tissue known as the placenta. It is disc-like structure that is embedded in the uterine wall and contains villi on the embryo’s side of the tissue. There are some blood spaces that surround the villi on the mother’s side. The villi present a large surface area and allow glucose and oxygen to pass easily. Even the waste substances generated by embryo is removed by transferring them into the blood through the placenta. It takes nine months for the complete development of the child. After this, the uterus goes through contraction which helps the mother to deliver the child.

The situation of non-fertilization of egg

The unfertilized egg lives for about one day. The ovary releases one egg every month, and therefore the uterus also prepares itself so that it can receive the fertilized egg. The wall of the uterus becomes thick and spongy. However, when the egg is not fertilized, there is no need of the lining, and thus it starts disintegrating and breaks out through the vagina in the form of blood and mucus. This cycle occurs every month and is called menstruation. It is generally last for around two to eight days.